In this article, part of my series explaining better ROI from software development, I’d like to look at Economic Shock.

What is Economic Shock?

“An economic shock is an event that produces a significant change within an economy, despite occurring outside of it. Economic shocks are unpredictable and typically impact supply or demand throughout the markets.” Investopedia

I've found over the years a number of instances where businesses have struggled to cope with the Economic Shock of dealing with the IT jobs market.

In summary, a lot of business simply haven’t realised how much their IT staff are worth.

Where most salaries have remained fairly static for the last few years, this hasn't been true for IT staff.

This has led to some fairly unrealistic (and damaging) expectations when recruiting new staff and retaining existing.

Why do I care?

Fundamentally this is about the financial stability of your organisation.

If your financial planning is not correctly understanding it’s operating costs, then there is a real danger that your business model simply doesn't work. An Economic Shock can materially affect your financial outcome.

So when should be looking at this?

Any time you are financial planning – you should have a view of the true market value – even if you aren't currently paying it. Certainly this should be part of your successor/ contingency planning.

As I hope to illustrate through this article, not doing so can put you at real risk.

The following it taken from IT Jobs Watch for Developers: 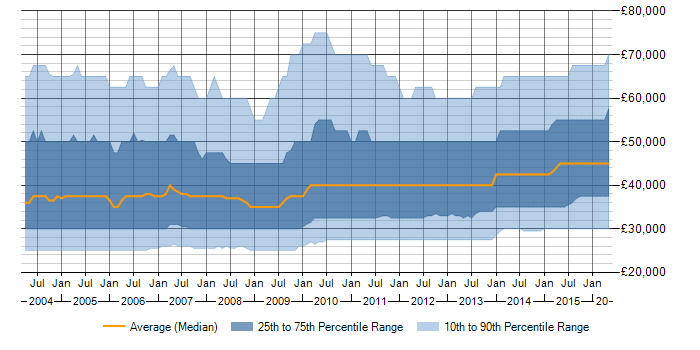 This is a fairly common picture across all IT disciplines.

If you are recruiting regularly, you are likely aware of the market conditions – so you should have a really good idea of local conditions for the types of employee you have.

The biggest shocks I see however are small to medium size companies that have grown up with a single Hero developer.

I've talked about Hero Developers in this previous article

Hero Developers have been the place where I've seen the greatest Economic Shock – and I've seen it in a number of organisations.

I've been in this position myself a few times.

I’d be the only IT resource that a company had and it relied on me for everything. In my early career (pre wife, kid & pets) I was quite a workaholic. I would work a very long working day (generally around 12 hours) & then come in on a Saturday as well.

It’s not that the business demanded it (or paid me for it). I wanted to do the best job that I could. There was work to be done so I got on with it.

I wasn't particularly bothered about salary either – I had enough for what I needed. But looking back I was very much beneath market rate.

I'm not unique in this. It’s a pattern I've seen in a number of businesses where they have benefited from a workaholic keen to impress. And over time, they perceive this as the norm.

When however that Hero leaves – the company is exposed to a massive Economic Shock. This stems from three things:

And in most organisations this comes as a massive surprise. Often this will surface as frustration.

The organisation has paid more for a one-to-one replacement; yet they are not getting the same hours or turn around. And for this the danger is to blame the new guy.

It isn't the new guy’s fault – it is simply unrealistic expectations from the organisation.

Unfortunately, I've seen it end poorly for the new guy simply because the organisation hadn't understood the additional benefit they had previously received.

The problem is that they simply haven’t been aware of the true value they had been receiving up to that point.

As managers we too often see staff as a number – a component of a machine which can be swapped in and out without consequence. This is simply untrue when it some to any level of knowledge working. Each individual is different – you will never be able to perform a straight one-to-one replacement.

Our tendency to over simplify the higher we go up the management chain. The greater the gross simplification, the greater the hurt to our organisation.

While the purpose of this article isn't to get you to stop your Hero Developer or any Workaholic tendency (although you should) – the purpose is to make sure you understand the value you are receiving.

This situation is very similar to a tax problem I had many years ago.

I’d started with an organisation and they had put me on an “emergency tax code”. Now that code was never updated. 18 months later we realised the problem.

The emergency tax code had been overly generous to me – paying out much more that it should have done. This left me with a very large tax bill.

My complains to the organisation AND the HMRC that this wasn't my fault fell on deaf ears – I’d had the benefit of all that extra money. I now had to settle the balance.

From an emotional perspective this felt incredibly unfair. I hadn't made the error. I had honestly believed that the money I received was mine to spend.

Logically though I understood the argument.

Regardless I had to pay up.

This is the situation I hope for you to avoid.

As a second example, I see this Economic Shock occur with people that have worked their way up in an organisation.

One particular example, an individual had moved into IT from the “shop floor”.

He had showed a flair for IT – a genuine aptitude for grasping technology and possibly one of the nicest people you’d ever hope to meet.

Things went great for about three years. He amassed knowledge both with regard to general IT and how the organisation used it – both valuable commodities.

He then came to me asking for an increase.

His request was well thought out. He had look at this market rate, pegged himself very well and was asking for what we both agreed was a fair amount.

Unfortunately, the organisation in question was blinded by his historical salary. The percentage increase was too much. The request was refused.

Yes the percentage increase was significant – but the actual monetary increase wasn't (in my opinion). This was a result of his salary never keeping track with his market worth.

In the end the individual left. We then employed a replacement at exactly the salary he had been asking for. In doing so we had:

It’s not difficult to see that this approach resulted in considerable negative ROI.

(In the interest of full disclosure; I'm really not a fan of % based increases. For me they are commonly used as a sheep dip approach to lazy management. They simply are not geared to properly rewarding and encouraging individual effort. If you want the best from your staff then the least you can do is look at them as individuals for 15 minutes every year.)

How to handle it

You need to be tracking that hidden benefit. Even if you only have it as a notional “win” on a P/L – it is still key to understand your true operational costs.

If you are dealing in commodities, then you’d take a short term drop in the cost as an exceptional benefit. You wouldn't base your entire business plan on a transient low price.

So the key is to track your staff to market costs.

Good managers should be able to do this. There is a wealth of information available to see the current market rate for any role.

If you need help, then engage a recruitment agency to do this for you (note: make sure you have a good contract in place to avoid poaching). They should be able to provide you with a good view of the local market.

You also need to look at how much an individual is worth to you as a business. In some cases this can greatly outweigh their market value.

And finally you can ask your team. Do they feel they are being remunerated appropriately?

You’d be surprised that in most cases they will generally peg themselves beneath Market Rate.

The good thing here is that if they honestly believe they are worth more that you are prepared to pay, then you can have a sensible conversation and handle the problem pro-actively.

The alternative is they resign and you have to be reactive.

As a final comment in the section, I would stress that salary is not everything.

Once “money” has been taken off the table for an individual, then their attention will turn to the working conditions, projects, etc. Again this is in line with the motivations described by Daniel Pink in Drive.

I have however focused on salary in this article as it is the single largest cost that a business needs to account for.

I hope that during the course of this article I have encouraged you to think about the true economic value you get from your staff – not just your development team.

I'm a great believer that your staff made a business. I believe your staffs welfare and needs should be at the forefront of what you do. And while this article hasn't been specifically aimed at addressing any discrepancies, I would encourage you to do so – your future self will thank you.

Addressing pay gaps aside; at the very minimum at least have a sensible view of their worth. That way if they leave or you have to replace them you are in a clearer position AND you are happy that the organisation can financially support it.

Ultimately this should never be an Economic Shock if you are pre-prepared.